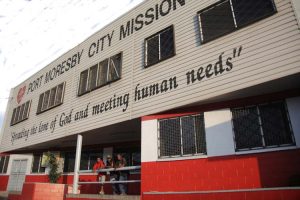 In 1993 Larry George, founder of City Mission, saw the need and felt the call to do something about the plight of young men living on the streets of Port Moresby.  Typically these youth had no jobs, little to eat and no where to sleep.  Poverty and illiteracy would breed the crime they committed to survive.  Some would simply steal to eat, but others embraced crime – rape, robbery, car-jacking, murder and more – as an acceptable lifestyle.

Larry opened the first city mission facility simply as a place for some of those boys to get off the street and find a safe place to get a meal and sleep.  Later he purchased a farm outside of Port Moresby that would later become the first New Life Skills Training Centre (NLSTC),

The NLSTC would become the heartbeat of City Mission.  Today the program offers basic life skills, literacy, vocational training and spiritual development through, a residential program.

In 2002 Larry and his wife Ruth saw the disturbing effects of Gender-Based Violence in the capital city. The statistics were unbelievable (upwards of 70% in some cases). Domestic and sexual abuse was rampant and no one was doing anything about it.  The City Mission board decided to raise the money and purchase a facility located at Ela Beach to provide protection and services for survivors of GBV.

Later Property was purchased in the Koki district that would serve as the administrative offices for City Mission as it would continue to expand over the years.  Today, the Koki facility not only houses the corporate administration offices, but also serves as a boys transition dorm for graduates of the NLSTC program and as a emergency crisis intake center for women.